Welcome to the CRYC

The first Clipper Round the World yacht race started in September 1996. Since then there have been nine races, and Clipper yachts have sailed in the Rolex Fastnet race and the Sevenstar Round Britain & Ireland. In total, there are now in excess of 2,000 people who can claim the special distinction of calling themselves Clipper crew.

The Clipper Race Yacht Club was conceived by Colin de Mowbray, its first Commodore, as ‘a logical way to bring some gentle order to this special group of adventurers’.

The driving force of the Club is the Committee, formed from a mix of current Clipper employees, ex-crew and ex-staff.

The Committee will be looking for volunteers for a number of active roles within the club, including representative ‘Race Captains’ from each of the completed races, to ensure everyone is included.

The Club will initially be formed under the Clipper Ventures umbrella, but the Committee will be solely responsible for the running and development of the Club. The overriding principle is not to make a profit, but to bring everyone together for the mutual advantage of all parties.

Clipper crews are never backward at coming forward so if you are interested in becoming part of the driving force of the CRYC now is the time to forward your names, ideas and suggestions. Let’s be hearing from you!

Please address any kind of correspondence, including application forms and cheques for joining fees, to: 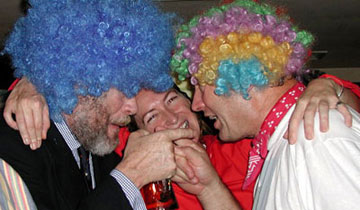 All appointments to the Clipper Race Yacht Club Committee are honorary.